Simon Clews is an Honorary (Senior Fellow) at the Peter Doherty Institute for Infection and Immunity, a joint initiative of the University of Melbourne and the Royal Melbourne Hospital. Here he advises on communication and engagement. Prior to this for fifteen years he was the Director of the Melbourne Engagement Lab at Melbourne University where enhanced the reputation of a world leading and innovative university through training, encouraging and facilitating some of Australia’s brightest minds to make their work accessible to non-academic audiences. This unique place supported postgraduate students, early career researchers and academic staff as they transformed their research into writing for non-specialist audiences. Graduates of the Lab’s programs published everything from award-winning books to trend-setting blogs, including articles, newspaper columns, opinion pieces and essays. Simon has also worked with writers and academics around the world to help them improve their writing and develop their careers as providers of creative, well-written non-fiction for a commercial market. If you are interested in working with Simon, you can read more here.

In keeping with his passion for researchers communicating their stories to as wide an audience as possible, Simon is a huge supporter of the Three Minute Thesis and Visualise Your Thesis competitions. He has been heavily involved in both competitions from the outset and offers one-on-one and group training for competitors. And you can download the updated version of Simon’s guide to the Three Minute Thesis competition, Your Time Starts Now!, here.

Prior to taking on the inaugural directorship of the Melbourne Engagement Lab, Simon took the fledgling Melbourne Writers’ Festival and over fourteen years placed it firmly on the world stage. 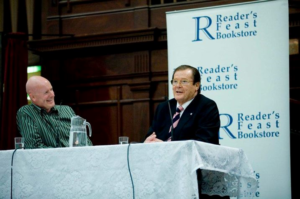 that takes place each November and occasionally the History Writers Festival. And his literary event experience extends well beyond his time as Festival Director and CEO of Melbourne Writers’ Festival and his work with Reader’s Feast – Simon was responsible for programming Stories Alive, a large-scale celebration of writing for children at Hamer Hall, Writers on Collins, a city precinct literary program and two site-specific literary celebrations – Writers at the Convent and Writers at Como. In total he has staged nearly forty major literary events, in addition to dozens and dozens of smaller events, and has presented over 3,000 writers to a combined audience of nearly half a million book lovers. Put simply – Simon knows books, writing and events!

In 2002 the French Government honoured Simon’s contribution to the promotion of French culture in Australia by awarding him the French Flair Award. As well as some very flattering speeches and much kissing on both cheeks, he received a bronze casting of Degas’ La Danseuse from the Louvre and a magnum of Pol Roger. The statue still proudly adorns a shelf in his office. The Pol Roger – sadly – is long gone.

He is a regular book reviewer and contributor to newspapers and magazines and once even took his highly honed retail skills and ventured into the world of guidebooks with Let’s Go Shopping, a very tongue-in-cheek international mail order shopping directory. Much praised and slated to become an annual fixture on the publishing calendar, this bright idea was killed stone dead by something called The Internet. You may have heard of it. Simon is still plotting revenge.

Simon is currently working on a book designed to help academics write, communicate and engage with the outside world, titled The New Academic, and due to be published by NewSouth Books in September of this year.

And, if you haven’t read enough about Simon here, you can read the back story to all this here.